Andi Dorfman Boyfriend in 2021: The Bachelorette Alum is Dating a Mysterious Man! Here's Everything You Need to Know

Andi Dorfman, following her split with Juan Pablo Galavis and romance rumor with Nick Viall, is dating a new boyfriend now in 2021. Who is the mystery man? We have the answer, we guess.
Posted On November 27, 2021
By Sonal Gera Following her split with Juan, Andi said, "we all have red flags in our relationship that we don't see. Looking back and seeing those red flags was cathartic for me, I realized our relationship wasn't the highlight of my life like I thought it was. So I took it off the pedestal and realized all was not lost."

Andi Dorfman was again speculated to be dating Nick Viall; The rumors of Andi and Viall dating started when they were spotted together in Santa Monica, CA. But both of them denied they had a thing between them. Now, coming back to 2021, Andi is seen with a mystery man!

Who is Andi Dorfman Boyfriend Now in 2021?

Andi Dorfman surprised her fans and friends with a picture on her Instagram. The 34-year-old television personality uploaded a picture with her new boyfriend, but, there's a but! The reality star still wants her man to be secret.

We suppose you already have seen pictures on Andi's Instagram, the person she is claiming to be her boyfriend is facing opposite the camera, while Andi Dorfman is hugging her new beau. One thing for sure, Andi's now boyfriend is from Atlanta. The only clue Andi Dorfman dropped her fans about her new boyfriend.

In the caption, Andi wrote,

Well, that's the only clue she left, or at least that what she thought. As we can see happiness on her face, she spilled a little something on the comment sections which helped us get some clues about her new boyfriend. Andi, replying to her friend, Samantha Gutstadt, said,

So, Andi Dorfman's Boyfriend is a Tennis Player?

No! It's still just a speculations, and all we know about him is, he loves tennis. However, after some research we found out Andi Dorfman's alleged boyfriend, Ben Crawford, is a designer and architect. He is currently an intern at "Pentagon.LA." 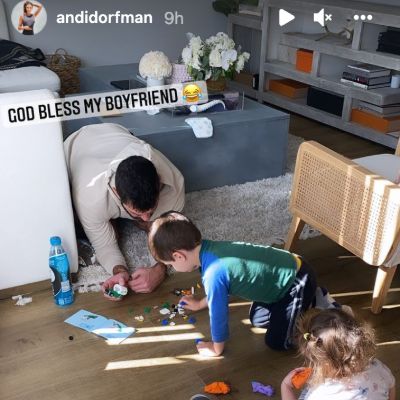 Recently, Andi uploaded a story of her boyfriend with kids, and we think it's only about time she reveals the identity of her beau, but not too soon, we guess. However, in the recent picture, it seems, the person is, in fact, Ben Crawford. We will have to wait for the official announcement, though.